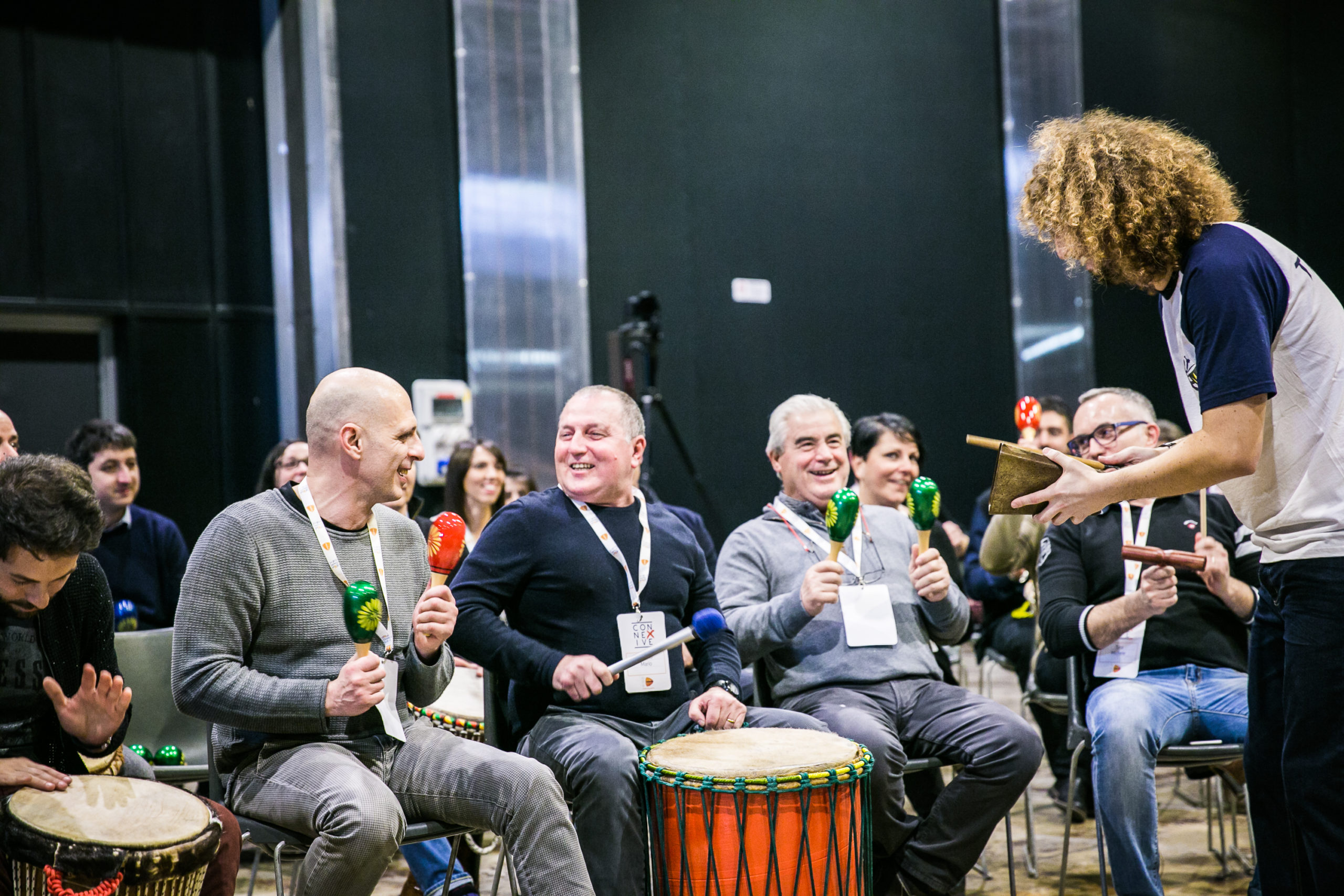 Rhythm and Science: the Benefits of the Drum Circle in a Corporate Team Building

Rhythm and Science are more and more related thanks to the new researches which prove the benefits of the Drum Circle in corporate team building activities.

A Drum Circle occurs when a group of people seated in a circle play drums and percussion in a process of free improvisation with the support of a facilitator. It is a new and innovative experiential methodology which is becoming more and more well known in Human Resources Development.

Thanks to the studies conducted within the HealthRhythms protocol sponsored by Remo, it was possible to expand the value of this methodology thanks to the scientific researches developed by Barry Bittman, CEO and president of the Yamaha Music & Wellness Institute.

He is in charge of innovative interdisciplinary teams in the development of protocols, algorithms and supplementary strategies which allow a network of people to optimize assistance and achieve specific goals within all sorts of communities.

Here is a series of scientific findings from research which show how the effect of playing drums and percussion is an important tool to facilitate human potential on an individual and relational level. According to the following studies, drumming in a Drum Circle:

A healthy immune system is a fundamental key to preventing infectious diseases.

We are exposed to millions of germs every day, so the reliability of our immune system in fighting potential infections is of indisputable importance.

What does it mean that by playing drums and percussion in a group we can strengthen the immune system?

The study of 111 participants in the percussion empowerment protocol showed a significant increase in the activity of natural killer cells after only one hour of group session.

In addition, the report indicates improvement in the neurological patterns associated with the stress response.

You can find the complete research HERE.

The so-called burnout is a working stress syndrome, characterized by emotional exhaustion, restlessness, apathy and a sense of frustration, frequent especially in professions with high relational implications (doctors, nurses, teachers, social workers and so on).

The phenomenon was initially studied in the 1970s in the USA and observed by the psychiatrist Maslach within the mental hygiene departments, in the professionals who dealt with patient care.

However, today this illness does not only affect the so-called ‘helping professions’, but it is widespread and transversal: it affects women and men of all ages, belonging to the most different job profiles.

But what are the causes of burnout? Is it possible to recognize its symptoms and undertake a recovery path?

This phenomenon is caused not only due to the characteristics of the current way of work, but also due to modern lifestyles: performance anxiety is in fact a typical phenomenon of the society in which we live and it even effects children of school age.

Young people, in particular, often clash with a working reality which is not the one they want or for which they are brought up, with dynamics and working conditions that sacrifice the human side, in favor of a purely economic logic.

This can generate severe stress that is often noticed late, which sometimes leads to sudden and non-rational decisions, such as self-dismissal, absenteeism or behavioral disturbances which cause the person to be dismissed by his/her superiors.

Among the objective causes of burnout, determined by working conditions and dynamics, we find:

Because of these reasons, burnout is becoming a more common phenomenon in many working environments. When we find in this kind of situation, employees or workers are not stimulated to give the best of self and it provokes a condition of low self-esteem and lack of trust in their organization.

This kind of environment inevitably leads to very precarious and unstable human relationships, as well as a lower efficiency and productivity which weighs on a fundamental aspect of each company: the financial wallet.

It goes without saying that this is a situation that does not benefit anyone.

That’s why experiential trainings are increasingly emerging to ensure a constructive way of facing these symptoms when they first appear, thus changing the paradigm that underlies general discontent through individual and group growth paths and dynamics.

The Drum Circle method has been used by us as an experiential methodology in different corporations to improve the functioning of the group.

An important aspect is the following recent scientific research lead by HealthRhythms and sponsored by REMO.

The experiment was carried out in a health care facility for the elderly who are not self-sufficient. As we previously said it can be a truly stressful environment.

A low level of stress in the operators and a good turnover of the staff mean a better care for guests and savings in employee costs.

The US Department of Health estimated that there is between 70 and 100% annual staff turnover in retirement homes (Wilner 1999).

During 6 study sessions with the Drum Circle on 112 employees in elderly care facilities, 46% showed a significant improvement in mood.

When a follow-up test was performed 6 weeks after the end of the study, the improvement in mood had continued to grow, increasing to 62%.

Based on the knowledge already gained from studies of the factors influencing an employee’s decision to quit, a team of economic analysts calculated that these improvements would lead to a staff change of just 18.3%.

The next follow-up showed an even higher reduction than it was estimated in the projections.

Obviously, the best thing to fully understand its potential is to experience it directly, just as Ticino Cardiac Hospital did in our training course. Here the feedback of Lavinia Vlad, head nurse of the operating room department:

“I had the privilege to attend a corporate training event with OneBeat.

They brought us with a lot of dedication and talent on the road of self-awareness and relational complexity, making possible “the impossible” by giving all participants abiding satisfaction through the will to overcome our own apparent limitations.

It has been a wonderful lesson in which they put their passion at our own service: music! Thanks again for this opportunity.”

“Stress is truly the basic component of any disease.” says James Rosenbaum, MD.

The way of working in our time has placed this scientific statement before our eyes in an imposing and sometimes dramatic way.

The most at risk are women, those who have precarious contracts and those who work more than 50 hours a week.

The consequences of stressful working conditions drastically raise the levels of anxiety, mistrust in oneself, dissatisfaction and repulsion towards what resembles work.

In some more serious cases the stress turns into aggression, impulsive actions, provocative behavior and, in the worst scenario, depression.

All these factors create precarious human relationships in the working environment, caused mainly by a lack of listening to oneself and others.

This causes an uncomfortable dynamic in a working group where people dialogue with their colleagues from an accentuated selfishness which keeps the individual from feeling part of a group.

The outcome, of course, is also a reduction of the productivity and a lower collective efficiency of the teams.

Stress is a discomfort that the current marketplace tends to impose on every company, but it has become of fundamental importance not to get overwhelmed by it.

An experiential training course or a team building can help any organization to face stressful situations with balance and a different mental approach.

Obviously, the best way to better understand the potential of a course or a team building is to experience it directly, just as Nestlé Health Science did.

“A team building together: 60 adults who became children again by releasing themselves on drums and other percussion.

Dharma Cristiano Botti has guided us in a musical path full of rhythm, coordination, but above all listening: stopping to be focused just on yourself and listening to others are the keys to teaming up, to go with the same tempo and to move from chaos to a concert.

The performance of the individual finds sense and accomplishment in the execution of the team.

A fun and very educational team building. THANK YOU, OneBeat!”

Published in February 2005 in the international research journal Medical Science Monitor, this research shows for the first time that playing a musical instrument can reverse multiple components of man’s response to stress, at the genomic level.

We know from previous studies that the percussion health protocol developed by REMO reduces stress and burnout, improves moods and strengthens the immune system.

This study looked at the effects of making recreational music at the genomic level and demonstrated not only a reduction in stress, but the inversion of 19 genetic regulators that turn on the response to stress, believed to be responsible for the development of common diseases.

The growing evidence that stress at work influences the predisposition to get ill emphasizes the importance of finding efficient ways in stress management.

This study on corporate employees in Japan was conducted to verify whether this percussion-related wellness strategy can demonstrate positive effects on the biology of stress in the workplace.

The outcome was that HealthRhythms protocol showed a significant potential for the well-being of the corporate workplace. (Masatada, W., Koyama, M., Utsuyama, M., Bittman, B., Kitagawa, M., Hirokawa, K., 2007).

Other studies by HealtRhythms have also shown that 40 minutes of ongoing activity with drums or percussion are enough to induce the following beneficial effects:

Another scientific research from the United States has shown how: the body “sounds” and proteins vibrate.

The discovery of some researchers from the University of Buffalo (USA) brings to the fore the greater convergence between science and information handed down to us for millennia.

It is rediscovered that vibration (sound) is very important for proteins, which in this way can quickly bind to other proteins.

Science is becoming more and more aware of the truths handed down by the great mystics and healers, since the dawn of time.

Quantum physics scientists have long believed that the vibration of the “strings” is at the base of the universe and create everything: from matter to the laws that regulate it.

They have not yet figured out how to integrate their knowledge into a single functioning model, the much sought after “unified theory”, but they now seem to agree that vibration, or sound, is the fundamental building block of our lives.

Sound seems to have influence even on a much larger scale than the subatomic one, as the studies of Masaru Emoto and others indicate.

A recent news from a study published in Nature Communications goes even further.

It shows that proteins vibrate like bells and our body has its own music with a fundamental role in the interaction between molecules.

Many mystery and alternative medicine schools have always affirmed that sound was an important tool in the healing and relationship processes of man with the universe.

The use of natural sounds as a healing medium through tinnitus, mantras, shamanic songs, therapies with gong and Tibetan bells, take on a completely different aspect in light of these rediscoveries.
Here, slowly, what for centuries has been branded by rationalists as “meaningless” and unscientific, finds new foundations, precisely in rationalist science.